Hot off the Press!!!

We are so excited to tell you, our friends and supporters, that we have just launched a website dedicated to the Rings Beach Wetland Group:

The brand new Rings Beach Wetland Group website is a fantastic resource that will take you on a journey of the history of the walking track in the Matarangi Bluff Scenic Reserve, from its inception and creation right through to all of the hard work that is done by our fantastic volunteers on a daily basis to help keep this wonderful reserve a conservation success story.

Head over and check it out and you will find all of these facts and more fascinating information on the Matarangi Bluff Scenic Reserve and some of the people behind it.

Along with the website we have entered the world of social media and have a brand new Facebook page.  We are looking forward to keeping in touch with our friends and supporters and our wider community through updates on our Facebook page.

In July this year we were over the moon to confirm that kiwi had returned to the reserve of their own volition.

Working with Project Kiwi, members of our group spent several consecutive nights in the reserve in June conducting audio monitoring for kiwi calls - essentially sitting quietly and recording kiwi calls, noting time, sex, distance and direction of the calls between 6pm and 8pm. 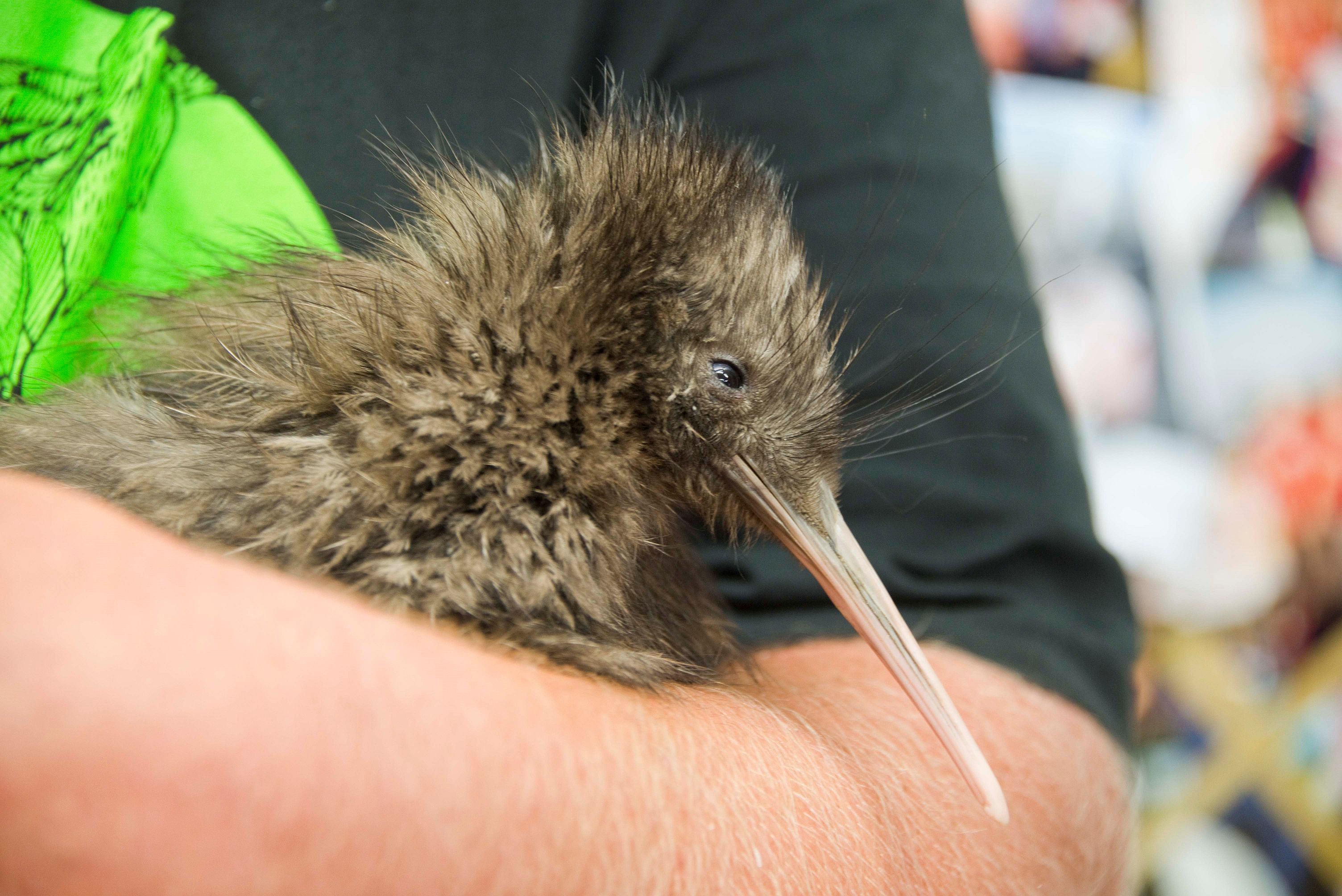 In the words of our secretary, Dave Fitzgerald: "Confirmation of the kiwi is the culmination of a long period of commitment and work by volunteers and supporters.  We’re excited – it’s very encouraging. It shows that the efforts of a number of people over many years is really paying off.”

Dave was involved in the monitoring and says the number of calls gradually increased over the course of the monitoring – with female birds heard responding to their male counterparts on the second night leading them to believe there are at least two breeding pairs.

They also noticed other signs of kiwi activity including finding an old pine tree stump which had been heavily carved at by kiwi, and kiwi droppings around it.
There will be ongoing surveys over the next two years in the reserve to collect baseline data about the population of kiwi in the area, and predator control efforts will continue to ensure our native bird continues to flourish in our backyard.

Unfortunately feral cats continue to be a significant issue in the reserve, and pose a serious risk for the native birdlife that live there, including kiwi of course. 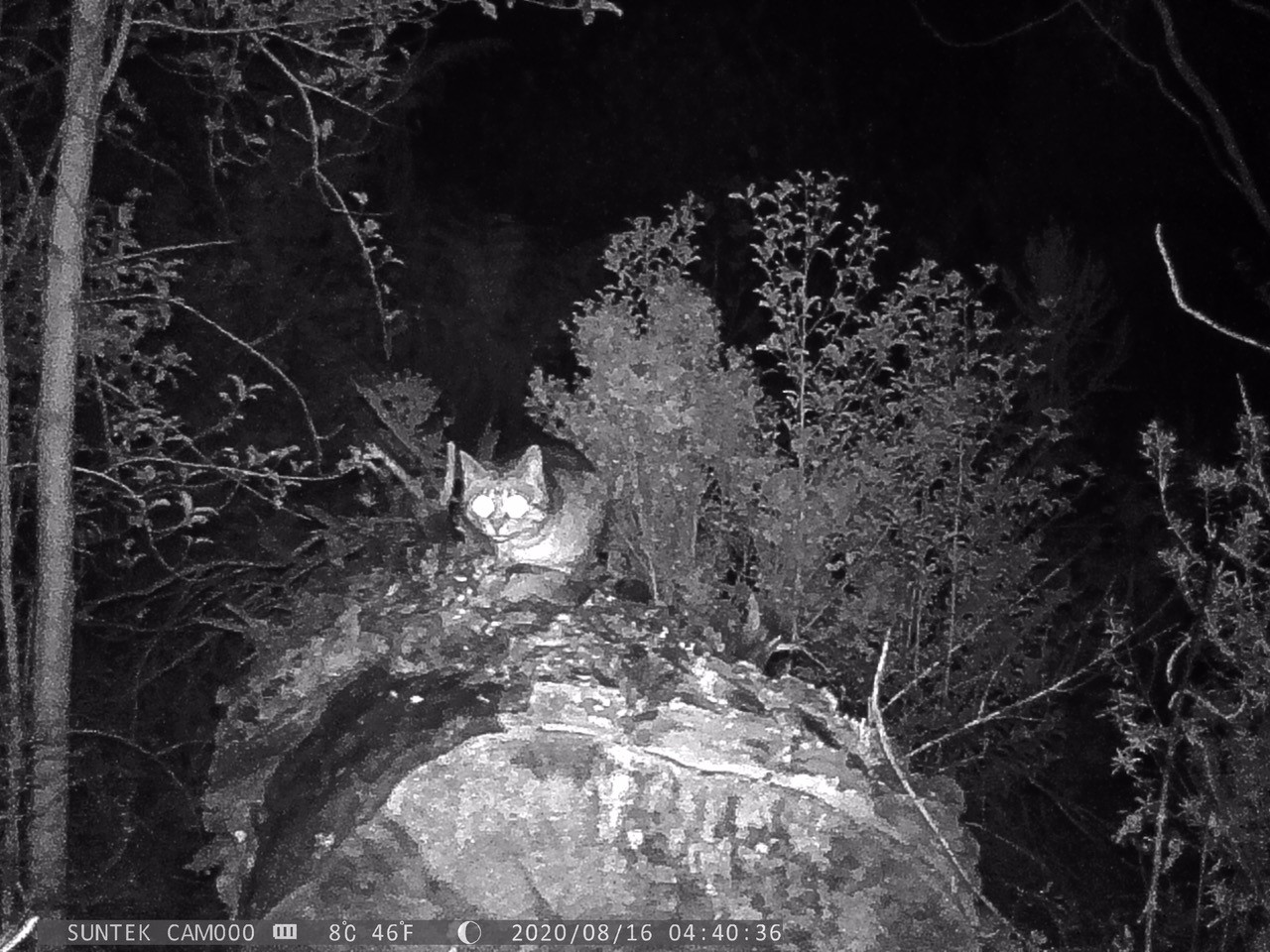 This year we have sadly seen an increase in feral cat activity, with more caught than in previous years.  Among those caught have been several juveniles, suggesting there are some breeding cats within the reserve.  This is a cause for concern for us and we continue to monitor and keep on top of this as best we can.

The best way you can help us is by please ensuring your pet cats are kept inside at night time to ensure our precious birdlife are kept safe. 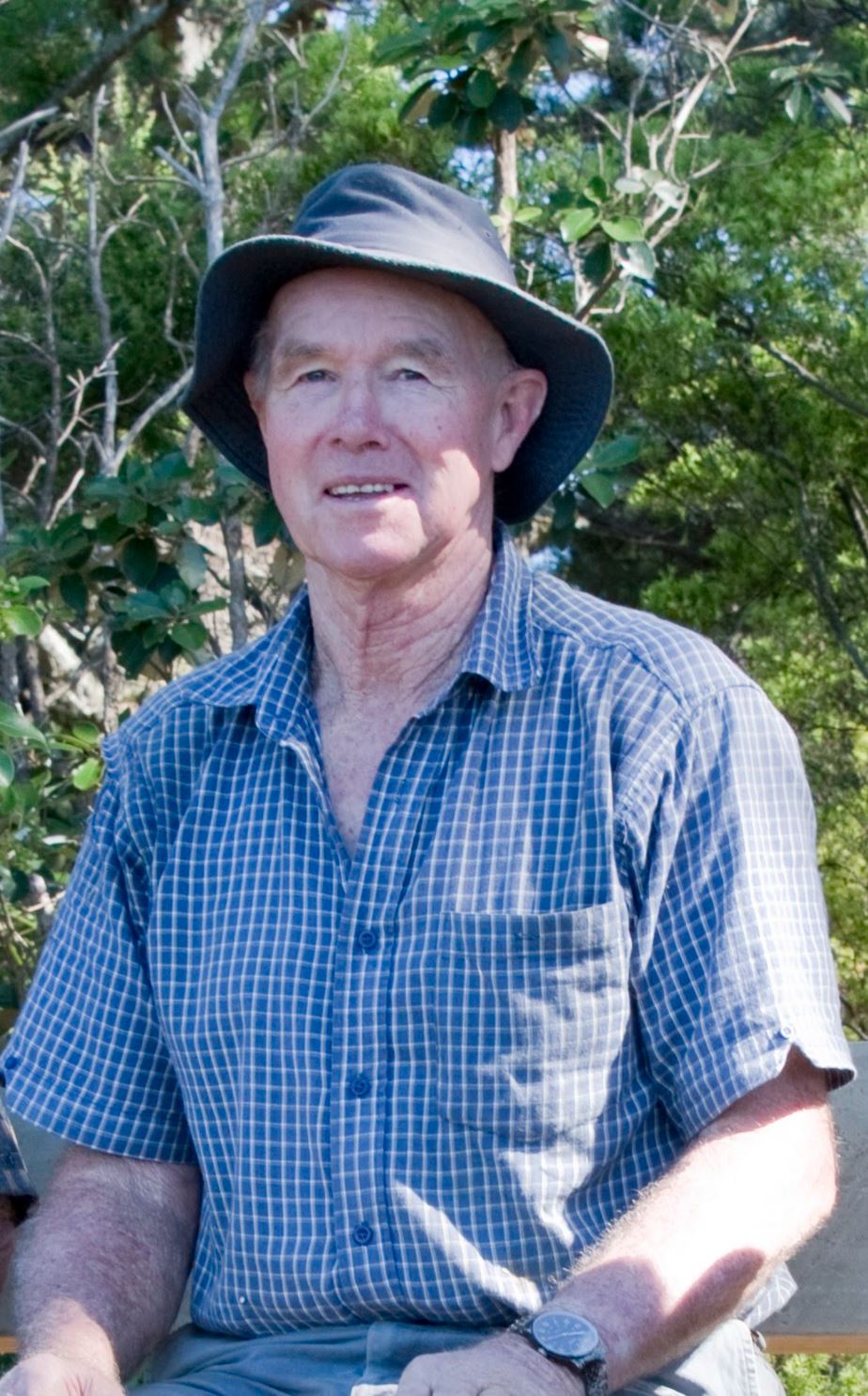 Ian was part of the original trio who created the track, and he has been, and continues to be, a huge contributor to the work of the Rings Beach Wetland Group.

Not only is he still in the bush most days, clearing trap lines or carrying out track maintenance, he also undertakes a lot of strenuous tasks that would challenge men of a much younger age, such as hauling water by hand into the interior of the reserve to water recently planted native trees.

Happy Birthday Ian!
From all of your friends in the Rings Beach Wetland Group. 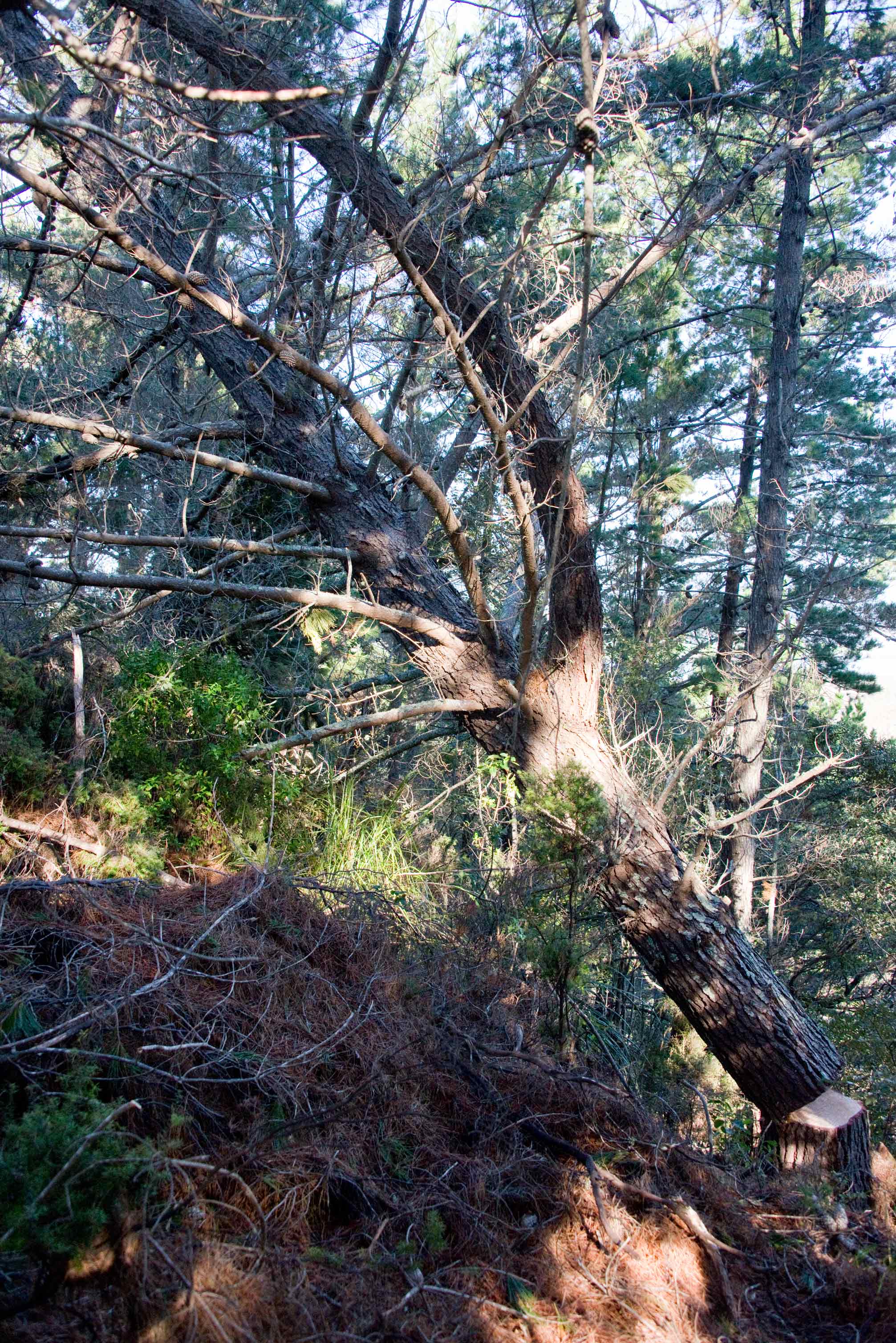 In August we received the final instalment of funding from the Waikato Regional Council (WRC) to fell wilding pines in the Matarangi Bluff Scenic Reserve.

Wilding pines suffocate the growth of the native bush when they are left to mature and therefore removal is a vital step in the bush regeneration process.

Tricky Trees carried out the felling during September and October, assisted by our volunteers, primarily Ian McDonald and John Scott, who were there every day to ensure that the health and safety of the fellers - and any members of the public walking the track - was not compromised.

As a result of this significant funding from WRC the group is thrilled to report that the majority of pines have been felled in the reserve. The residual trees will be tackled once further funding can be secured.

We look forward to keeping you up to date with images of the significant impact this has made on the regeneration of these particular areas of the bush.

More Traps in the Pipeline

As a result of the success we have had in eliminating predators in the centre of the reserve, particularly around the wetland which was the group's initial focus, we are now planning to expand the traplines further next year.

With the removal of wilding pines continuing on the southern and eastern sides of the reserve, the aim is to install traplines that will eventually encompass the entire perimeter, thus reducing the migration of predators from outside the reserve. 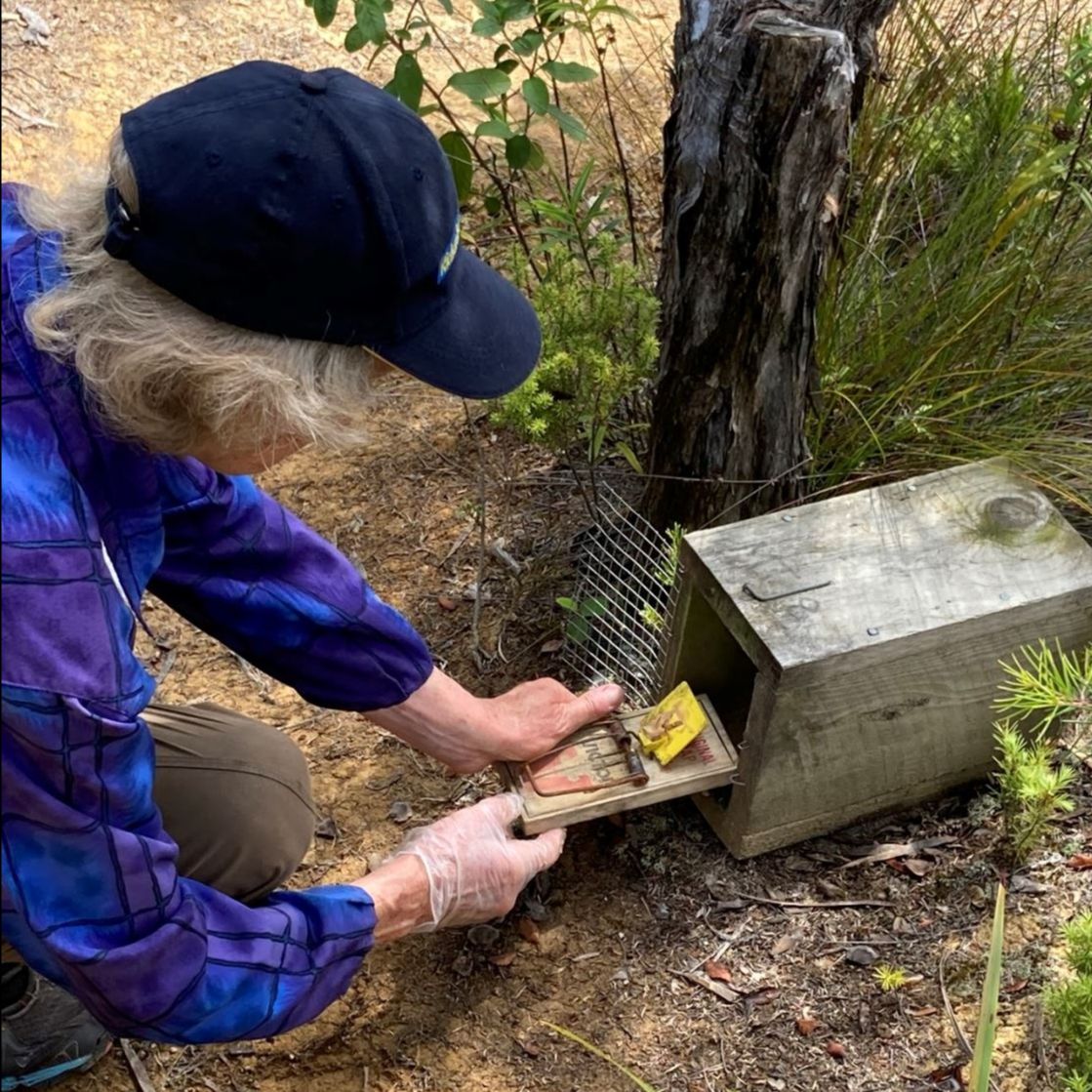 The first stage will involve forming a new track parallel with the Matarangi causeway road to the bridge, along the edge of the estuary and up to the main walking track on the ridge.  Traps will be placed along this boundary targeting predators including rodents, possums, stoats and weasels.

A grant has been received from the Waikato Regional Council through the EIF fund that will cover approximately 50% of this important work, however if you would like to contribute to the $11,000 shortfall required to complete this project, any donations would be gratefully received.   Details of how to make a donation can be found here. 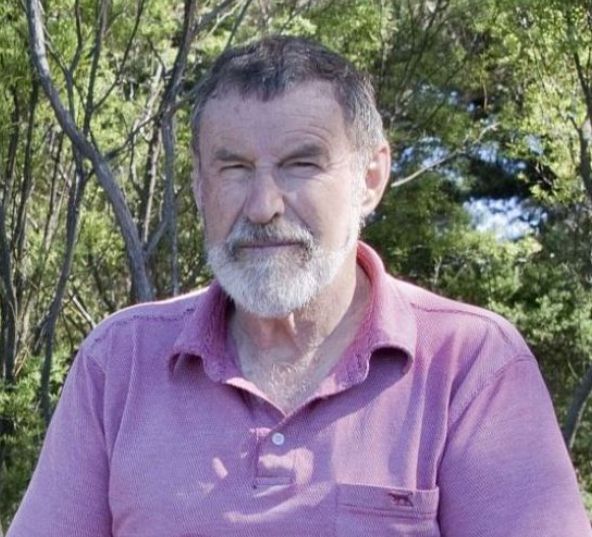 We are sad to farewell long serving volunteer Ian Patrick as he moves south to be closer to family.

Ian has been a member of the group since 2013, and has made significant contributions in all aspects of the work that the Rings Beach Wetland Group carries out.

Ian's achievements include numerous successful grant applications such as those for upgrades to the walking track, the felling of wilding pines and predator trapping equipment.

You will also see some of Ian’s work when you walk the Bluff Reserve track as he built the memorial seats placed throughout as a tribute to Bruce Smith, the visionary behind the creation of track.

Ian also spent many hours collating and writing the book ''One Man's Dream''. This book is a detailed historical record of the Rings Beach Wetland project from the moment it was an idea in Bruce Smith's head, to the discovery of the wetland and the ongoing conservation work that is carried out today.  We are very fortunate that as an accomplished photographer, Ian documented many of the milestones of the project through a wonderful array of images that you can see not only in his book and but also on our new website and Facebook page.

Thank you so much Ian for your dedication and hard work over the years.  We wish you and Diane all the best for the future.

This newsletter is brought to you by the Rings Beach Wetland Group Inc.

If you appreciate the work we do please support us